With my flight back rearranged for 16th I needed to start on the way back to Santiago.

I decided to head for Puerto Varas in the “lake” country, broadly due West of Bariloche. Initially I had thought I would go to Puerto Montt but Rosalia had told me that Puerto Varas was much nicer.

The weather was being kind to me. Gone were the snow and sleet showers of the last two days and the very strong winds which had accompanies them. The forecast was right:sunshine and less wind. That didn’t mean it was war, it was hovering around 6.0c as I left.

I refuelled and headed East back the way I had come in to Bariloche in order toe skirt the Easten end of Lago Nahuel Huapi so I could take the turn onto Ruta 40 heading North West to Villa Angostura.

After a few Km I took the first shot of the day, one I particularly like. The sun was glinting off the tops of the peaks which surround Bariloche:

I was enjoying the road as well. It was following the contours of Lago Nahuel Huapi which is always likely to make for a good motorcycling road:

Through Villa Angostura I took the left off Ruta 40 signposted Chile. This was pretty good as well although not high – the pass into Chile is only about 1,300m.

The road ran past  Lago Espejo:

and then I reached the Argentinian border control which is a few miles away from the actual border.

The procedure is the same both sides.

There is a border post. He/she hands you a “Tramite” sheet with your registration number on it. You ride to the border post and go in. Tramite 1 will be passport control, where they stamp your passport to confirm you are leaving the country.

Tramite 2 is the Aduana or Customs. Here they check the bike document you were given when you entered the country against the V5 Registration document.

Sometimes there’s a Tramite 3 – as on the Chilean side where they check you’re not carrying unauthorised foodstuffs – but on the Argentinian side they weren’t fussed as I was leaving.

Then you leave and pass through another check where you hand over the Tramite sheet which has been stamped at every station you had to have attended – this stops you trying to sneak past the checks.

A similar procedure occurs when you get to the Chilean post – actually about 23 miles past the border. But there are 3 Tramites – passport where they stamp the passport and give you a PDI slip – vital to keep this safe as it gives the details of the temporary Visa they grant you. The Aduana where they give you a new bike certificate – again vital if you want to take the bike out. Thirdly, the agricultural department to check for prohibited foodstuffs. Cars can get well turned over but given the limited luggage capacity of the bike, it was a very cursory check.

Anyway past the Argentinian post and it was about10 miles to the border on a nice twisty road:

Although it’s not high there was a lot of fresh snow:

I stopped for some photos and an Argentinian chap and his wife also stopped and asked if I wanted a photo taken of me. I couldn’t say no and the quid pro quo was I took shots of them and their baby against the snow bank.

A kilometre or so later on we reached the actual border: 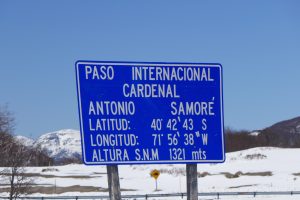 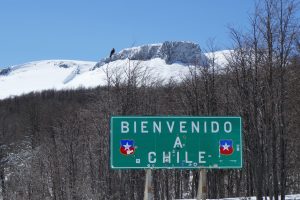 From there it was a good run down onto the plain: 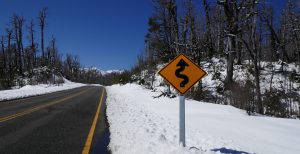 On the plain it was very noticeable how different the landscape looked. It was very lush and green.

The SatNav was saying to go to Osorno and then head South on Route 5. I’d looked at the map and saw there was a road marked which would take you down and around the shores of Lago Llanquehui which is a big lake and Puerto Varas sits on the South Western corner. However, it was marked in white indicating an unmade road. When I arrived at the junction the road was tarmac so I took a chance that it would run out – but it didn’t and it was tarmac all the way to Puerto Vargas.

This is active volcano country and it seems that the earthquake activity is much greater in Southern Chile rather than mid or Northern Chile. The sun was out and the sight was great:

and this one did erupt in 2015 after about 40 years of doing nothing which I guess in Volcano terms is the blink of an eye. You can see some footage here:

From Ensenada it was a 35 minute run to Puerto Varas. My route for the day: 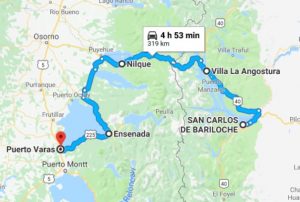