My motorcycle trip to Chile and Argentina started yesterday with a bus and train ride from Andorra to Lleida to Madrid’s Barajas Airport. I arrived very early for my Iberia flight to Santiago but the bus timetable meant that I ran the risk of cutting it fine if I caught the later bus. So I left Andorra at midday and was through security and in the lounge by about 6.20pm for an 00.10am flight this morning. My Priority Pass would have got me in the lounge anyway but I was flying business class because it’s such a long flight – it took 12.5 hours in the end – that I was prepared to pay the extra for a bit of comfort; that and I had a shedload of air miles to cash in!

Anyway I can handle free wine and beer in any airport lounge with the best of them, so a few drinks, a half decent book and a shower before take-off all meant the time passed swiftly enough.

A ew more drinks on the plane plus a bit to eat and a decent film sent me off for a few hours of reasonable sleep so when we arrived ahead of time I was feeling good. I got through passport control and customs quickly and was at the hotel within an hour and 20 mins of landing.

But by way of background why South America, and in particular Chile and Argentina, for a motorcycle trip. I’ve toured in Europe a lot so fancied a change and in fact I’d not long come back from 9 days in France with Chris and Kyle. I also had a 7 week gap in my schedule free from meetings. I also know many Argentinians, Chileans and Peruvians from Andorra and they seem nice people, and I fancied riding the length of La Cuarenta – Ruta 40 – in Argentina which stretches from La Quiaca on the Bolivian border all the way down to Tierra del Fuego, about 5,000km or 3,200 miles in total.

I have no fixed itinerary other than broadly to ride North from Santiago, cross over to Salta because Argentina are playing Australia at rugby in the 4 Nations championship on September 29th and I fancy seeing the match, and then go up to La Quiaca and start the Ruta 40 bit before heading back to Santiago for the flight back at the end of October. early November.

My GSA is scheduled to arrive this Saturday 15th and assuming no hitches I can pick it up on Monday 17th and be on my way. So I’ve a few days to wander round Santiago before starting my ride. There should be plenty of photos and for starters here is one taken from the plane of Mount Aconcagua, which at 6,962 metres or 22,837 feet, is the highest mountain in South America. 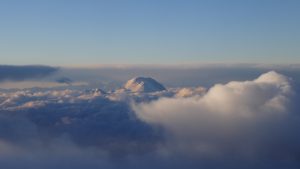