After getting into the apartment yesterday morning and getting cleaned up I ventured out for a stroll. The apartment is in the Lastarria district so only a short distance to downtown Santiago. It reminded me a bit of Porto – there are a few modern skyscrapers but a lot of faded glory. It looks as if the infrastructure hasn’t been well maintained. You would never mistake this for a Northern European city. If it was in Europe it would be in Portugal, Spain or Italy. Quite a bit of poverty in evidence, with a fair few street beggars, but it didn’t feel at all threatening although I suspect that like most cities there are areas best avoided. Anyway a good way to stretch the legs.

Later on I decided that it was time for a beer. I found a beer bar – no spirits served – called Cafe 200 – a few hundred metres away. This was local Chilean beer called Kroos and very nice it was too.

After a decent nights sleep it was time for some work. I woke up to a message saying that a firm of Irish Solicitors had been trying to contact me without success. Had I given them the right mobile number? Their message was timed at 9.30am Irish time which was 5.30am Chilean time when I was firmly in the land of nod – I had told them where I was and reminded them of the time difference by email the day before – Doh!

So I phoned them, told them that the number was correct, and also told them to agree by email the day before when they were going to call. We shall see whether that works.

After that there were some tasks which needed dealing with. First an email arrived with the Air Waybill for the GSA. This told me that it had arrived on Air Canada but via Toronto which surprised me. The Air Waybill needed printing. After a couple of abortive efforts I eventually located an internet cage where for 100 CP (Chilean Pesos – 790 of them to the Euro – so about 13c or 15p – I got a hard copy to show to the Chilean Customs on Monday morning.

Next up was the need to get a couple of tyre repair kits – the sort that will fix a small puncture by injecting foam into the tyre through the valve. It took a bit of time to locate the right end of the Avenida Lira where the bike shops were and after one unsuccessful foray my next one struck gold as they had Motul kits which will do the job: 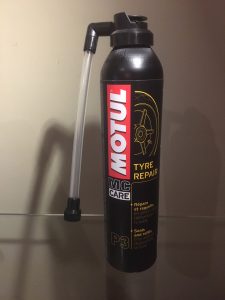 Anyway official business over for the day it is time to observe the Chilean Independence celebrations – the party starts this evening and continues until Wednesday. If I get on the bike on Monday I will have to watch out for pissed Chileans!

Still it’s time for another: 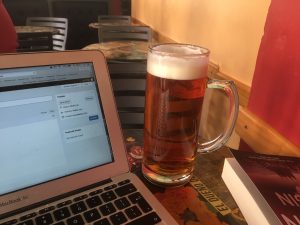