It was my last day in Mendoza before heading South to Bariloche so it was time to explore.

I decided to head West towards the Chilean border and see if I could access the pass leading to the statue of Cristo Reventador on the border.

So I headed South on Ruta 40 for about 15 miles before turning right onto Ruta 7 which would take me the entire way to Las Cuevas where the pass road started.

As soon as I got onto Ruta 7 I could see Aconcagua, at over 22,000 feet the highest mountain in the Americas, North or South:

and here’s one with the BMW in it,  Looking nice and clean and with two new tyres from BMW Mendoza on it:

I stopped to fuel up and headed back on Ruta 7 for Uspallata. Soon I picked up a railroad – like virtually everyone I’d seen in Chile or Argentina this was disused. I would follow it the whole way to Las Cuevas:

The road was good but there were odd patches of potholes so I had to keep alert, but soon the valley opened out:

Now I have been posting photos of roadside shrines. Frankly the Argentinian ones aren’t a patch on the Chilean ones but the Argentinians have a niche – which is shrines covered in plastic bottles – not empty ones because they would blow away: the bottles are full – of what I don’t know but it doesn’t look like pee!

Anyway exiting a tunnel I came across the largest one I had seen, by some level of magnitude:

There must have been thousands of bottles. What the meaning behind this is a mystery to me.

Anyway carrying on I reached Uspallata where Ruta 7 takes a 90 degree turn left to head West towards Chile.

The road to start with is very good:

but the surface deteriorates the higher you get. It’s not surprising – its very cold and I was soon above the snow line. I was also fighting a string wind coming down the valley.

I got to Las Cuevas where the main road continues into a tunnel which takes you across the border into Chile. It was clear that the old pass road would be impassable due to (a) it was a hard packed earth and gravel road and (b) it was covered in snow higher up. My GSA was running brand new Michelin Anakee 3s which don’t have enough off road capability. Anyway I could but look up and just about pick out the statue. It’s on top of the pinnacle in the middle of the photo:

The road tunnel starts at about the same place where the old rail tunnel would have started. Interesting how the railroad has been entirely superseded by road and air transport.

There was no point in hanging about so I started back. This photo was taken at 3,011 metres heading East towards Uspallata:

As I ascended the pass I’d noticed the entrance to the Aconcagua Provincial Park. Mike, who part owns and runs my bar of choice in Andorra – Hunters in Arinsal – is due to climb Aconcagua next year, so he may like these pictures:

First a couple of those panoramic pics which the camera takes quite well:

And now some of Aconcagua itself:

And one with the bike in it to prove I was there:

and another one showing the two peaks very clearly. The one on the right is 30 meters higher than the one on the left:

Heading further down I noticed this sign – “Las Malvinas son Argentinas” – the Falkland Islands to the Brits. Interestingly I haven’t had a single comment about the Falklands war since I’ve been here so I was surprised to see the sign:

but you do see them dotted about the place.

Further back towards Uspallata I dropped below the snow line and took these photos:

and finally as I entered the floor of the valley I took this shot showing the abandoned railway bridge:

Back in Uspallata I looked at the possibility of coming back to Mendoza on Ruta National 52 but discovered that it very quickly became a gravel and dirt road so decided to retrace my steps using Ruta 7. 400 Km or 250 miles in total and I was back in Mendoza.

The route for today: 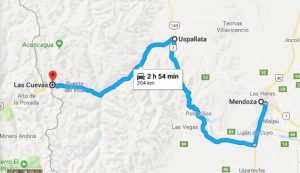 Tomorrow I start for Bariloche. It’ll take me at least 2 days. I’m told the road is paved the entire way but that the condition is in places very poor. We shall see.

3 Replies to “3 October – Ruta 7 towards Chile and Aconcagua”