I left Antofagasta on Tuesday 25th en route to San Pedro de Atacama via, I hoped, a look at the Mina de Cobre at Chuquicamata North of Calama.

A few miles into the ride – back on Route 5 – I came across the first mine of the day at Mantos Blancos – except all you could see from the road was a spoil tip maybe 2 miles along the road and maybe a couple of hundred feet high – the mine was hidden behind it.

I stopped at Baquedano for a cold drink and had a chat with the guy driving a Kenworth Truck – he told me it had an 800 litre fuel tank and 450 HP:

Back on the road and after a few more miles I kept going straight onto Route 25 rather than staying on Route 5 which was heading North for Peru. Route 25 was pretty much a straight run to Calama although it diverted for about 10 miles at one point to get around Mina Spence. Their mines are big.

Arriving at Calama I was met by this statue:

I continued on to Chuquimata but getting there I found that you could only view the mine on a guided tour. All you could see were massive spoil tips but not the hole in the ground which is 4.3 km long, 3 km wide and over 900 m deep. You can read about it here: https://en.wikipedia.org/wiki/Chuquicamata

I wasn’t going to hang around for a guided tour but FWIW here is one of the smaller spoil tips There’s a large truck at the base which gives you some idea of its scale:

I headed back to Calama and picked up the road to San Pedro.

First thing that caught my eye was this impressive roadside shrine:

I thought it was nice of his relatives to leave him a car so he could scoot about in the afterlife but then noticed they had removed the engine – maybe he wasn’t such a good driver. Anyway this got the roadside shrine of the day award.

It was a tedious enough ride towards San Pedro but just before I got there I crossed through the Valle de la Luna and moonscape is probably a good description of this:

You could also see how much volcanic activity there had been. This is Cerro Juriques which is due east of San Pedro at 5,904m amsl.

I eventually found my hotel – not listed as such in the Garmin map data – and found that it had the town’s only petrol station next door so that at least was convenient.

Anyway here was the route for the day: 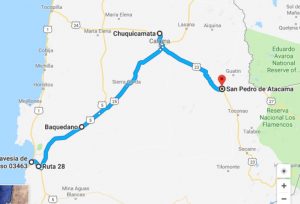 San Pedro was a bit like Vicuna with the hippy backpacker vibe. Everything apart from the church is single story and virtually all made of adobe – essentially mud with straw mixed in. There were lots of shops selling tours to the various attractions but I don’t do guided tours so decided that the following day I would go and explore on the bike.

However, I felt like a beer and asked at the hotel bar for one. They informed me they didn’t sell alcohol! FFS a hotel that doesn’t sell even a beer. What was the world coming to? Anyway help was at hand at the Cafe Roots 50 metres outside the front gate:

Looking at the map I could see three passes from San Pedro into Argentina, Paso Jama, which I knew was a paved road the whole way through to Argentina Route 9, Paso de Sico which the map indicated was paved to the Chilean border and a third pass about which I could get no useful information.

So the following morning I headed for Paso de Sico. After about 50 miles I reached the village of Socaire. The SatNav said the road didn’t go any further but I checked the settings and switched off the avoid unpaved roads and a road appeared on the device – as I knew it would because I could see a perfectly good tarmac road leading out of town. So off I went and it turned out to be a really good ride.

I had checked my altitude in Socaire and it said 3,200m. I hadn’t appreciated how much I had been climbing. This was my new altitude PB. Previously it has been Col D’Iseran in the French Alps which I had ridden a few times or Cime de la Bonette at 2,860m (but not a pass just a paved road).

Continuing upwards I rode through what must have been the lava field from the extinct volcano above:

and I came out on I’d describe as a high plain:

The road was in good condition so I continued on

and spotted ny first vicuna – 6 of them grazing. This was a change from what I had ridden through on the way to Antofagasta which it got hotter the higher you went, and with zero vegetation. Here it got colder as you ascended but there was lots of growth and lots of evidence of animal life.

Continuing on I came across my first “Salar” or salt lake:

and further on I came to Laguna Tuyalto

where there were flamingos

I continued on but a few miles down the road I was met with this:

In fact the road was passable as a bus had stopped in Socaire heading this wayand hadn’t come back but I wasn’t going to take a chance on getting stuck. You could feel how relatively thin the air was and I didn’t want to drop the bike and find myself unable to get it upright. So it was time to turn around and head back.  I’d ridden about 107 miles from San Pedro and took the same route back which involved me crossing the Tropic of Capricorn:

Here is the route for the day and the profile: 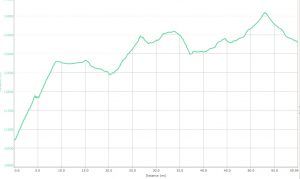 I filled the bike up back at base so I’d be ready to hit the road earlyish the following day. I would have about 375 miles to go across the Andes to Salta in Argentina.