Today would be a long day. The SatNav said 375 miles and although there’s a Chilean website which lists the status of all the border crossings and that said the Paso Jama was open, and the information was that the road was paved its entire length, that didn’t tell you what condition the road was in. Cold can do dreadful things to a road surface – just look at the photo from the previous day where I’d turned back. The road surface was severely damaged and the high point today was said to be at 4,850m amsl, or about 2,000 feet higher than the previous day.

San Pedro sits at 2,400 metres and as I left town  I could see the road heading up to the right of Cerro Juriques. After about 8 miles of flat road the climb started. In the next 18 miles, where the dirt road to Bolivia branches off I’d climbed 2,200 metres.

The signs were looking good. The tarmac even this high up was in good condition with only limited bits of surface break up and then only on the edges.

It was however, very cold at about 1.5 degrees C. Thank god for BMW heated grips.

Continuing on I came to my first salt lake of the day. Some of the tour buses were there but I couldn’t see a flamingo in site. There were however, some ducks:

and a little further on a small herd of Vicuna

It was warming up a bit and the road still showed no signs of degradation. I was really enjoying this. I came to Laguna Aguas Calientes which was very beautiful with a large heard of Vicuna about a mile away – too far to take any meaningful photos:

Not long after I reached the border:

with a sign covered in motorcycle club stickers saying we were at 4,320 metres – my Sat Nav said 4,285, again under reading:

A mile down the road was the border post. After about 25 to 30 minutes of being passed from one counter to another to have papers inspected, new papers stamped etc I was through, and riding through a high plain. I could see trucks maybe 6 miles ahead and they would be doing 60 and I would be doing maybe 75 and it would take 15 or 20 minutes to catch them up and overtake them. Still it was now pleasantly warm and the road was good. Periodically I’d pass groups of vicuna.

After about 75 miles I passed through Susques where route 52 crossed Route 40 – just a dirt track at that point, and further on I came to the Salinas Grandes – the large salt flats.

Yes all the white stuff is salt

and this building is constructed entirely from salt blocks:

After a break for a drink I continued and after a few miles I got to a great bit of road which wouldn’t be out of place in the Alps:

The summit was at about 4,100 metres the last high point of the day. The descent was fine though there were 4 sections, none more than 100 meters long where the road surface had been destroyed and needed to be completely resurfaced. From there I rode down to Purmamarca and joined route 9 which took me past San Salvador de Jujuy and then onto Salta.

I must have wasted 20 minutes on this last section of the trip waiting to go through Police checkpoints. What they were looking for I’ve no idea. But there is no point in arguing with the Police especially when they are carrying guns.

In summary a good day’s riding. Here is the route and the route profile: 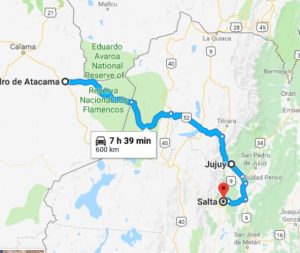 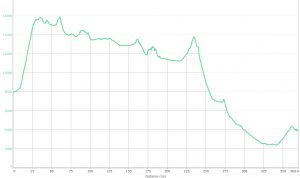 3 Replies to “27th September – Across the Andes to Salta”